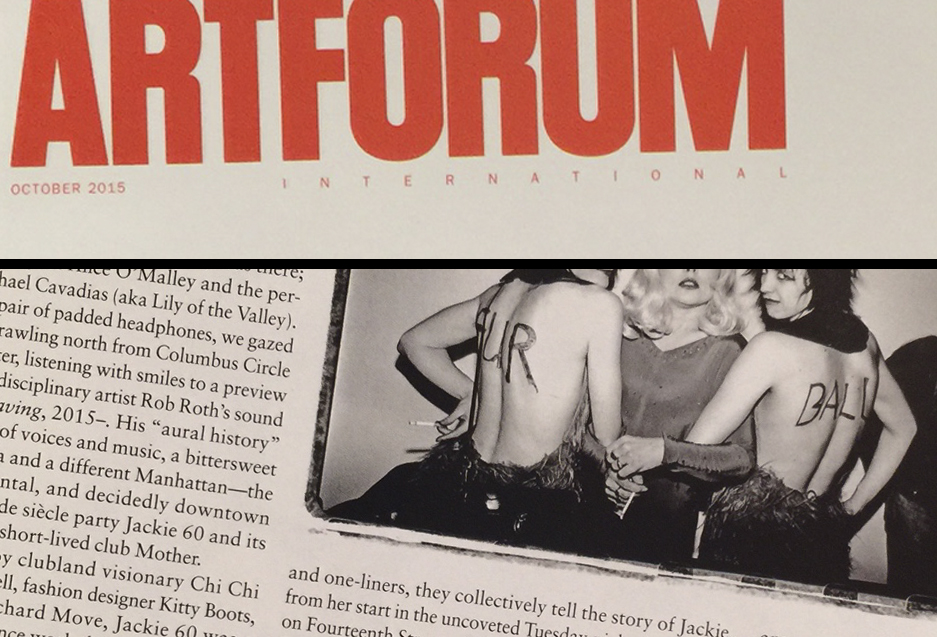 Jackie 60 was a laboratory for performance work that didn't belong in a theater but wasn't traditional nightclub fare either. By Johanna Fateman | A musician, writer, and an owner of Seagull Salon in New York. She is working on a book about Andrea Dworkin.

ON JUNE 28,2015—that hot Friday when the Supreme Court legalized gay marriage, kicking off a joyful and extra -legit Pride weekend in NYC—I sat in an air-conditioned gallery on the seventh floor of the Museum of Arts and Design with a small group of people, young queers and some familiar faces from a very particular, very gracefully aging demimonde. Debbie Harry was there; so were the photographer Alice O’Malley and the per-former and DJ Michael Cavadias (aka Lily of the Valley). Each with our own pair of padded headphones, we gazed down at the traffic crawling north from Columbus Circle toward Lincoln Center, listening with smiles to a preview of director and multidisciplinary artist Rob Roth’s sound installation Night Paving, 2015—. His “aural history” is a narrative collage of voices and music, a bittersweet portrait of another era and a different Manhattan—the pansexual, experimental, and decidedly downtown scene orbiting the fin de siécle party Jackie 60 and its home, the beloved but short-lived club Mother.

Founded in 1990 by clubland visionary Chi Chi Valenti, DJ Johnny Dynell, fashion designer Kitty Boots, and choreographer Richard Move, Jackie 60 was a laboratory for performance work that didn’t belong in a theater but wasn’t traditional nightclub fare either. Drawing from the fertile and overlapping drag, trans, burlesque, and art -world talent pools, the producers matched an anything -goes curatorial approach with a manic DIY energy. They were deceptively disciplined, though, keeping things on track with inspired weekly themes (such as Klingon Women or Bleak House) and a strong in-house brand. Boots was the gatekeeper, enforcing the club’s whimsical but strict dress code, sometimes fashioning costumes for lackluster clubbers from a box of fabric by the door. The resident fetish performance troupe House of Domination (a collective of dominatrices) was a constant, as were the Jackie MCs, a rotating cast of personalities who narrated each night’s program, delivering arch commentary over house music—a format echoed in Roth’s piece. Layering material from his extensive interviews with a DJ set by Dynell (an eclectic, post -postmodern mix featuring club versions of everything from Diana Ross to Danny Tenaglia and the Spice Girls), Roth perfectly evokes the club’s ambience as well as the fragmentary nature of party conversation in general. As the scene’s witty and reflective players deliver anecdotes, analysis, and one-liners, they collectively tell the story of Jackie, from her start in the uncoveted Tuesday -night slot at Nell’s on Fourteenth Street to her reign as the radiant anchor of Mother, which Valenti and Dynell opened on Washington Street in the meatpacking district in 1996. (This was back when blood ran across the sidewalks into the gutter; you could get frites around the corner at the twenty-four-hour restaurant Florent or flog somebody at Hellfire Club on Ninth Avenue, but there was nary a designer boutique, fancy hotel, or major museum in sight.)

Jackie themes that merited further exploration spurred the development of other events, such as the ongoing annual Night of a Thousand Stevies, a tribute to Fleetwood Mac’s whirling queen, and the weekly cyber-fetish party Click + Drag, which Roth himself cofounded and produced. There were specialized monthlies, too, like Move’s high -concept series Martha@Mother, a semi-satiric homage to Martha Graham, hosted by Move in drag as the modern -dance icon. The night typically featured an opening montage of found footage by video artist Charles Atlas and guest performances by every kind of dance -world luminary, including, once, an onstage interview with Merce Cunningham about his years with Graham. Such stunning, edifying events were common: “I have a Ph.D. from Mother,” says actress Heather Litteer early in Night Paving, describing the club’s formative role in her development—a sentiment echoed by many.

It’s tempting to sprinkle boldface names throughout any account of Mother—and I guess that’s what I’m doing—but Roth chooses seamlessness and mystery over celebrity shout -outs. He doesn’t identify speakers in Night Paving, he told me, because Mother had its own inclusive star system that celebrated patrons and performers equally, welcomed anonymity, and respected privacy. The voices of Genesis Breyer P-Orridge, Amanda Lepore, Justin Vivian Bond, Antony Hegarty, and Penny Arcade are unmistakable, and the identities of other interviewees become clear from context, but it’s not crucial to know who’s talking to follow the plot.

The last Jackie 60 took place late in 1999, just a few days before the new millennium. Mother closed its doors shortly after that. While the characters of Night Paving are frank about the difficulties the club faced (Rudy Giuliani’s cabaret laws, rapid gentrification) and fondly describe a time of lower rents—when artists who were gainfully underemployed in bars, offices, and dungeons could operate their after-hours careers at a loss—there’s no bitter nostalgia in Roth’s mix. That was intentional, the artist explains: “There are wonderful and interesting things happening all the time in New York. It’s just different now.” If the story of Jackie and Mother, a vital experimental club scene ruled by trans people and sex Workers where official art collided easily with underground culture both onstage and at the bar, can inspire yet another generation, he’s happy. Meanwhile, he’s searching for the right space in which to install the piece. I vote for the meatpacking district’s hottest new venue, just a stone’s throw from Jackie’s final address — the Whitney Museum of American Art.