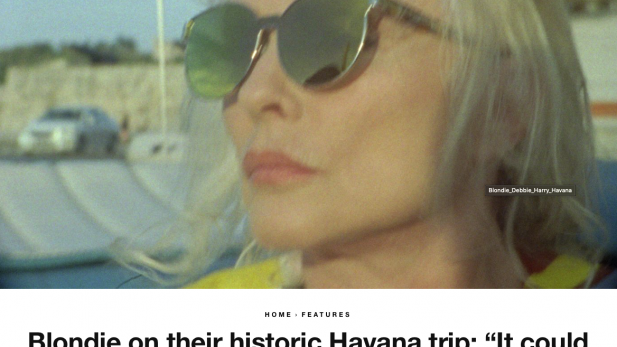 NME.COM – Blondie on their historic Havana trip: “It could have been a disaster”
Rob Roth | 14, June 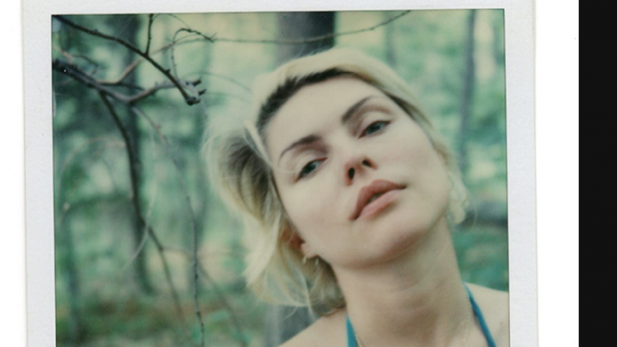 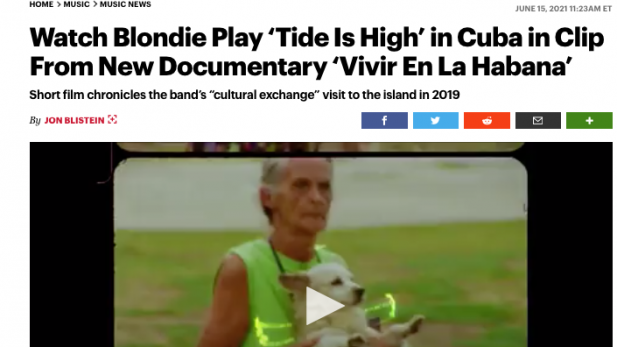 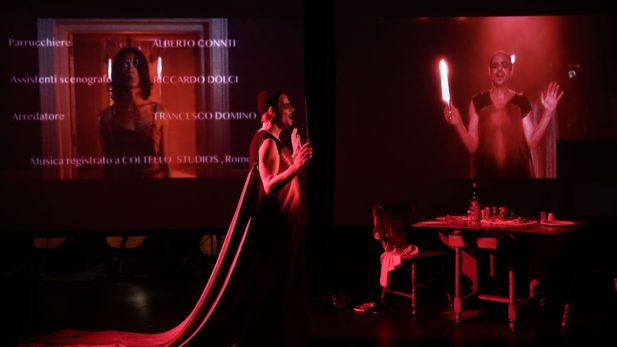 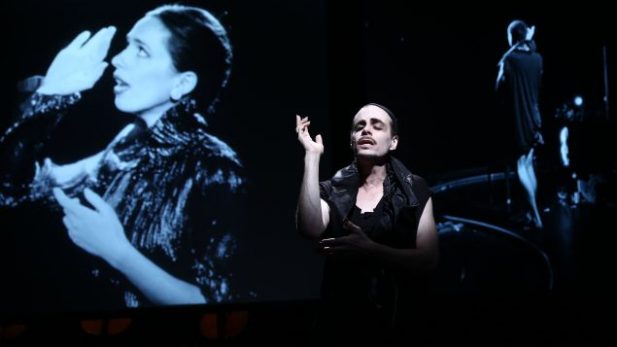 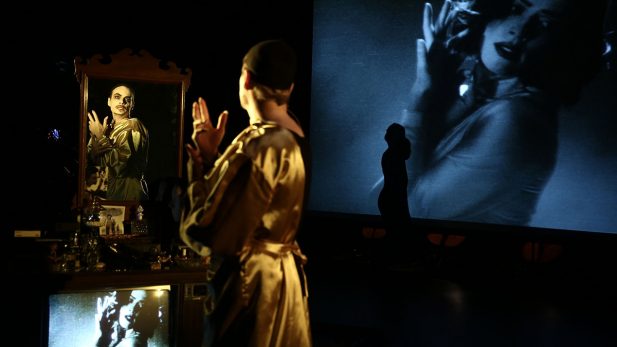 THE THEATER TIMES
Rob Roth | 22, September
ROB ROTH’S “SOUNDSTAGE” FIRES UP ACOUSTIC IMAGINARIES - by KaiChieh Tu | 22nd Sep 2018Soundstage, conceived by residency artist Rob Roth at HERE, is a compelling stream of consciousness that flows along with the sound waves and vintage film footage. With stunning technicality and poetic sensitivity, the show paints and
View More 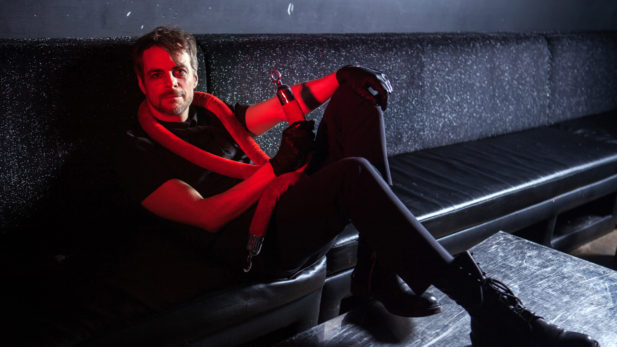 New York Times
Rob Roth | 30, March
Rob Roth Previews the Black Party, a ‘Night to Let Go of Your Inhibitions’ By Brian Sloanmarch | March 29, 2017This Saturday night, thousands of gay men will don leather outfits or the skimpiest of black accessories to dance at a club on the Far West Side of Manhattan for
View More 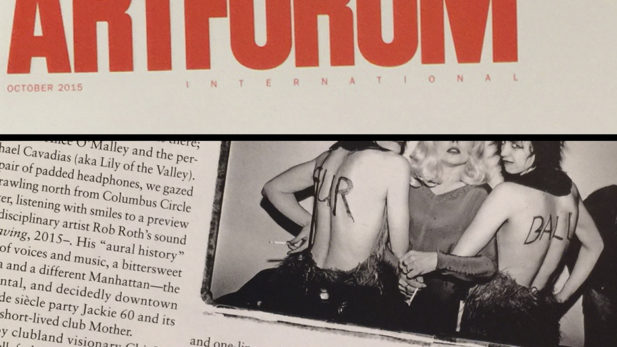 Artforum
Rob Roth | 09, June
Jackie 60 was a laboratory for performance work that didn't belong in a theater but wasn't traditional nightclub fare either. By Johanna Fateman | A musician, writer, and an owner of Seagull Salon in New York. She is working on a book about Andrea Dworkin.ON JUNE 28,2015—that hot Friday when
View More 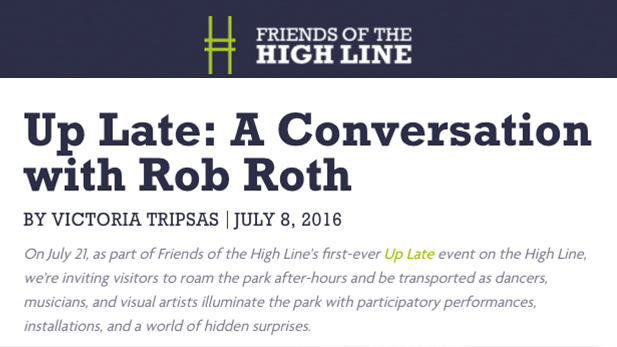 Friends of the Highline
Rob Roth | 30, March
Up Late: A Conversation with Rob Roth BY VICTORIA TRIPSAS | JULY 8, 2016On July 21, as part of Friends of the High Line's first-ever Up Late event on the High Line, we're inviting visitors to roam the park after-hours and be transported as dancers, musicians, and visual artists illuminate
View More 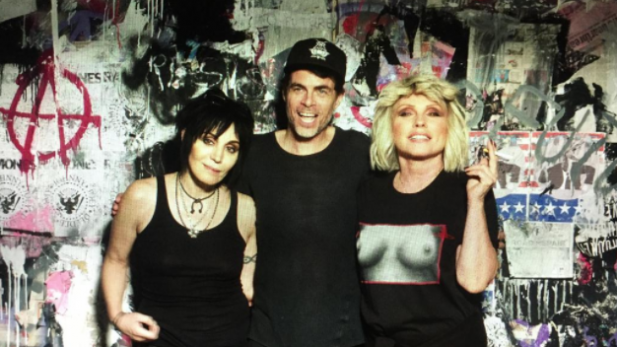 When Blondie released their 11th album in May of this year, we saw the band call on very hot for 2k17 songwriters like Dev Hynes and Charli XCX to contribute, but fans were also treated to a more heritage gift in the form of Doom Or Destiny. 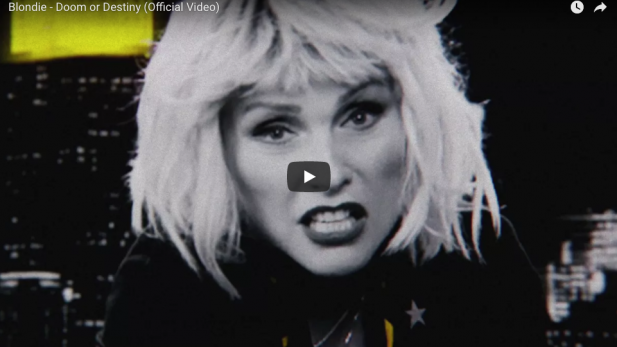 Blondie’s new music video for its song “Doom or Destiny” is a great example. It features Debbie Harry and Joan Jett as cunt mug-carrying anchors for news of the “impending apocalypse”. Described by Debbie Harry as, “The most openly political video Blondie has ever done,” 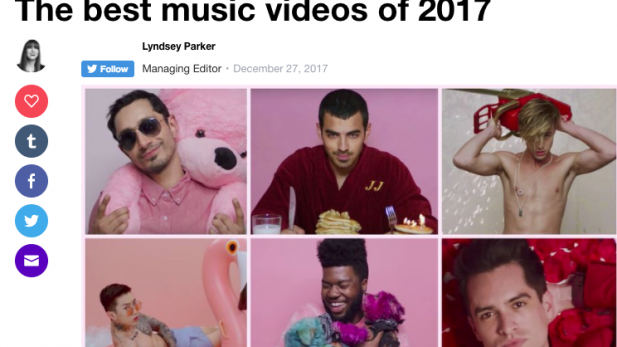 How fitting in a year of political unrest and #MeToo that Debbie Harry has joined forces with fellow female badass Joan Jett for this amusing but apocalyptic news broadcast.

For nearly three decades, New York City-born multidisciplinary artist and performer Rob Roth has been a subversive force in the city’s culture, drawing from the worlds of theater, art, music, film and dance to create commanding work that transcends categories or classification. First educated as a painter, Roth’s expansive medium focus is the result of valuable training in technology while working in the commercial creative sector.  Today Roth’s work is inspired by that duality of art and technology: a poetic lyricism, the luminous palette of a fine artist and an unstinting eye for well-considered detail along with virtuosic technological skills, along with an irreverent wit and a dark sensibility that embraces the futuristic, the metaphysical and eroticism. Roth’s work has been showcased at such venues as the New Museum for Contemporary Art, Performance Space122, Abrons Art Center, Here Arts, and Deitch Projects as well as the Whitney Museum of American Art, among others.

Rob Roth has collaborated with a vast range of artists and performers over his career and views the integration of multiple disciplines as fundamental to his creative drive and vision.  Roth regards theatre as ritual and uses a cinematic vocabulary along with riveting live performance, video and installation to create singular deconstructed narratives. His influences include renaissance painting, classic Hollywood films and queer history. Often proclaimed a visionary within the worlds of art and theater, and a pioneering media artist worldwide, Roth is one of a few fine artists who has the ability to translate his distinctive aesthetic and masterful technical skills into viable commercial projects. Over the years, Roth has worked as a creative consultant for The Mill (NY, London, LA), leading projects with clients including Coach, Lady Gaga, Rihanna for Samsung, AT&T, Showtime, HBO and David Bowie.

Described as a “nouveau Cocteau” by Michael Musto,  Roth graduated from the Pratt Institute in the early 90s and eventually became a key figure in the underground nightlife scene, most notably with the legendary Tuesday night Jackie 60.  In 1995 he co-founded Click + Drag, a weekly Saturday night party at the infamous MOTHER nightclub in 1995,  Presaging today’s digital landscape by decades, the “cyberfetish” event integrated early technology, video, fashion and nightlife culture with a vibrant otherworldly sensibility.  Click + Drag ran for four years, attracting a fanatical following, and was revived at other venues throughout the late 2000s.

Roth has served as creative collaborator for Debbie Harry and her band Blondie since 1999, directing various projects ranging from film and video, and including her recent New York Times bestselling memoir, Face It. Additionally, his short film Blondie:Vivir En La Habana, which documented Blondie’s 2019 trip to Cuba, premiered at the 2021 Tribeca Film Festival. Chronicling the band’s long-time dream of performing in Havana, the film included live performance and captured intimate behind-the-scenes life in Havana shot on 16mm and Super 8. The film received much acclaim, subsequently appearing worldwide at RIFF in Iceland, SeeYouSound in Italy and Sheffield DocFest in U.K.  Roth also directed Blondie’s notable music video for  “Doom or Destiny,” featuring Joan Jett.  Described by Debbie Harry as “the most openly political video Blondie has ever done,” it appeared on several “Best of 2017” lists.

Roth’s bold yet enigmatic theater piece, Soundstage, premiered at New York’s HERE Arts Center in 2018.  Featuring actor Rebecca Hall in a devastating performance, the piece received high praise ranging from “a lusciously designed 60-minute queer exorcism that meditates on memory, imitation and decay” to an “immersive fever dream of a production” to the New York Times declaring that Soundstage ““deftly evokes the fleeting transition from wakefulness to dreaming.”

“Rob is that rare magical artist that goes to the places we rarely visit in waking life.”

“Rob is a true artist/ auteur/ shaman of the new century.”